The Ageless Wonders™ took their second straight walk-off win on Wednesday, this time vs. the Grays at Herlihy, as they eeked out a victory in a roller-coaster game that saw a little bit of everything.
In all there were a combined 27 runs, 29 hits, and at least nine errors, including on the final play, an overthrow to home plate that allowed the winning run to score in the bottom of the 7th.
The Wonders are 2-0 on the season, and as manager Larry Pietras pointed out, they have a run differential of +2.
The Wonders had an 8-2 lead after 4, but the Grays narrowed it to 8-7 with a 5-run 5th. The Wonders extended it to 11-7 in the bottom of the 5th, but the Grays put up another five-spot in the top of the 6th to take a 12-11 lead. Going into the bottom of the 7th down 2 runs and the sun setting below the horizon, the Wonders got off the deck for the second straight week to score a knockout win. Manager Larry Pietras credited the win, in part, to the Wonders' new purple jerseys emblazoned with a gold lightning bolt which contributed to "the lucky lightning comeback walk-off win."
Nabil Hannoush pitched 5 innings. Chris Ciepiela pitched the final two for the vulture win.
Mike Whately pitched 6 1/3 innings in the loss.
The Grays' Matt Boulanger went 3-4 in the lead-off spot, stealing 2 bases and scoring 3 times. For the Wonders, Scott Taylor went 3-3 with a walk and 3 runs scored.

Garry Webber pitched a complete game over 7 and at the plate went 5 for 5, with 3 runs scored, and two stolen bases.
"It was a monster game," said manager Doug Stowers.
The Isotopes improved to 2-0, while the Goats fell to 1-1.
The 'Topes scored 2 runs in the first and then added 3 more in the 2nd to break out to a 5-0 lead.
The Goats had the bases loaded in the bottom of the first but could not score.
Webber kept the Goats off the board until the 4th when they scored twice on a 2-RBI single by Steve "Squeeza" Gargone.
They scored 3 more in the 5th on successive singles by Jerold Duquette, Tony Dismukes and by Goats-for-the-day Matt Boulanger and Stu Clark, to make it a 6-5 game.
But from there it was all Isotopes, as they scored 8 runs over the final two innings to put the game away.
In addition to Webber, other Isotope stars included Michael Arbour who reached base 4 times (2-3, BB, HBP) and scored twice, and Steve Youngberg who went 2-2 with 2 walks. He also scored twice and drove in 3.  He also hit a mammoth shot well into the trees down the left-field line that carried just foul by about 10 feet, coming that close to being a grand slam.


The Phillies and the Plug Uglies faced off at Shea Field in Agawam Thursday night, fulfilling the lifelong dreams of Eric "Noodles" Bennett and Chris "Chaka" Scanlon of playing on the same hallowed ground as The Beatles, Tom Seaver and Chico Escuela. For the rest of the Plugs it was little more than a confusing google maps trip through Agawam.


The Phillies started the scoring in the top of the first with two runs against Plugs starter Greg Elbaum. In the bottom of the first the Uglies displayed one of their patented "Ugly" innings, leaving an astonishing four runners stranded on base without scoring a run. Things were looking like a repeat of last week, when they were only able to muster one run.


That changed in the second inning when the Uglies cycled through the batting order and scored 6 runs, due to a combination of timely hits, walks and a hit batter against Phils starter Ron Totten. From there the Plugs rolled onward, scoring four in the 3rd, 2 in the fourth, one in the 5th, and one in the 6th for a total of 14 runs. Most everyone in the lineup contributed to the offensive output, particularly Bill Evans (2-4, 3 runs, 2 rbi, 3 SB), Sam Mead (2-4, 2 runs, 2 rbi), Jon Adolf (1-3, 2 runs, 1 rbi), and Mike Olkin (1-4, 2 runs).


On the pitching end the Plugs sent Greg Elbaum to the mound to start the game, who pitched 5 strong innings giving up three runs, 6 hits, one walk with 4 strikeouts. Plug rookie Jeff Whitehead came in to finish up the game, pitching two hitless innings with no walks and one strikeout.

TLDR: Plugs score early and often for their first win.
For the Phils, Mitch Gaslin drove in 2 runs with a 2-out single in the 1st and Max Strubel was 2-3 with an RBI. Phil-for-a-day Senior Jacques was 2-3. Jon "J.R." Ross and Andy Klepacki each pitched 2 innings. 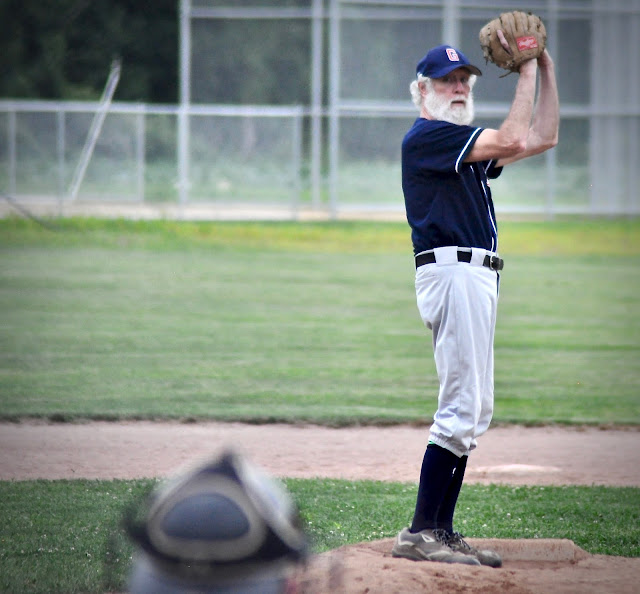 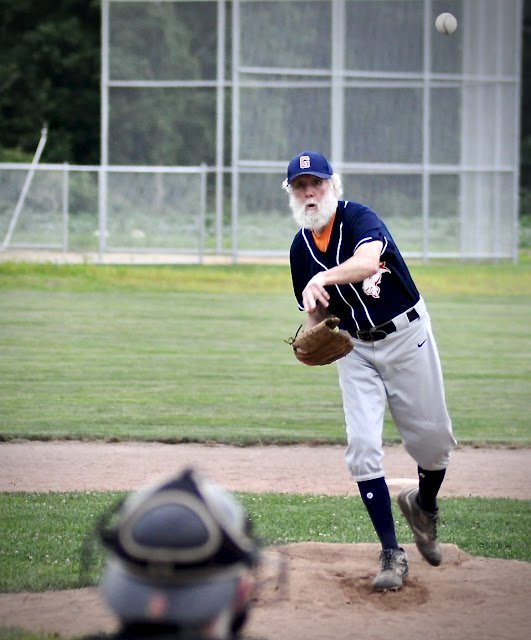 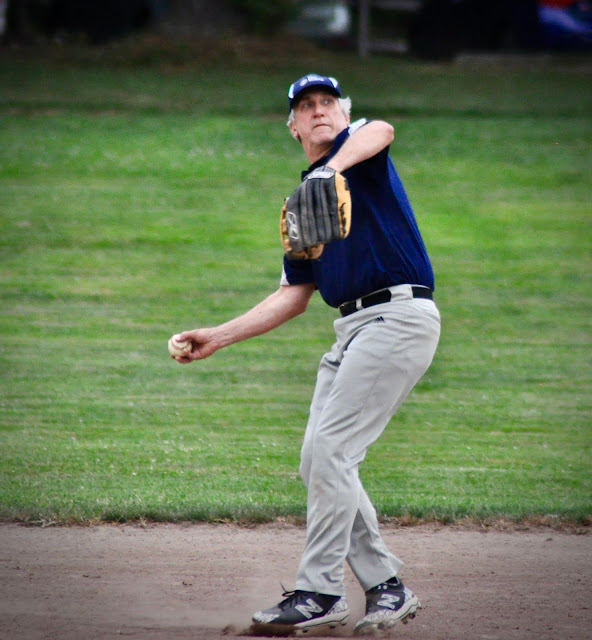 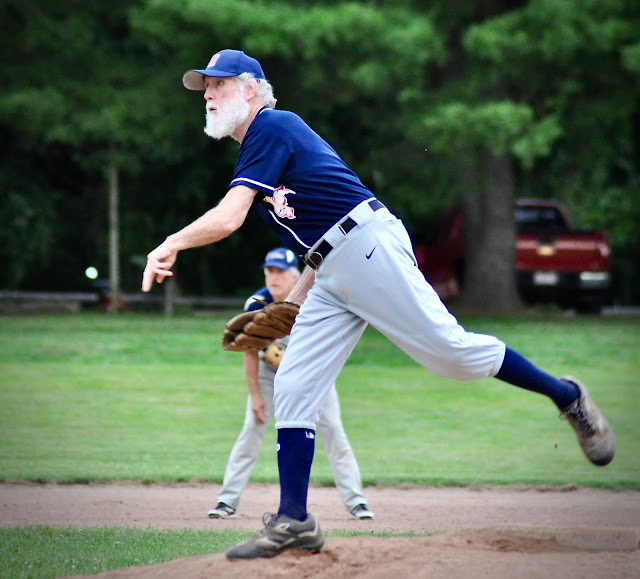 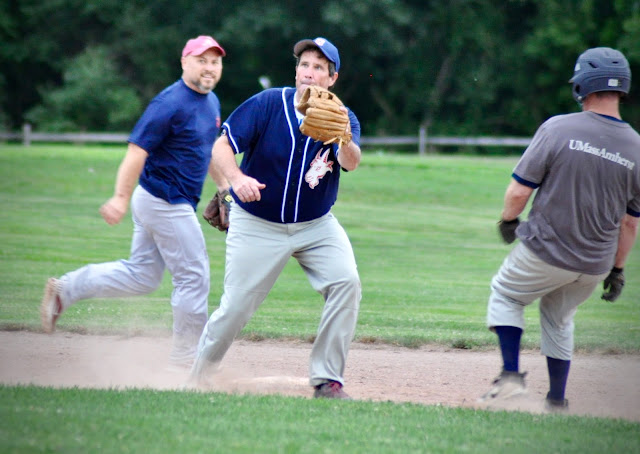 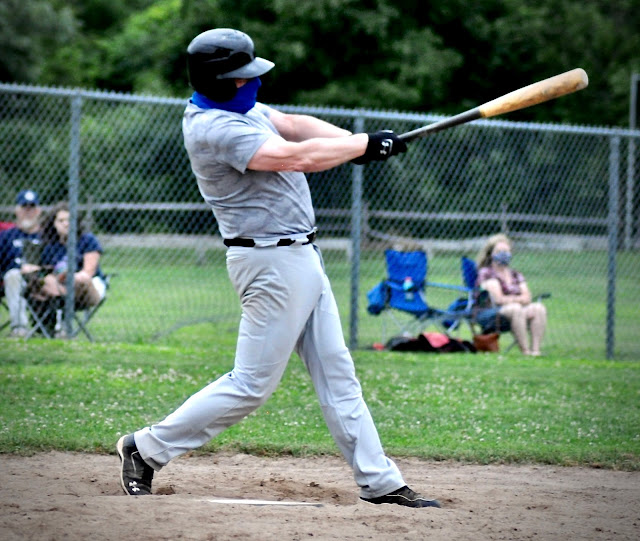 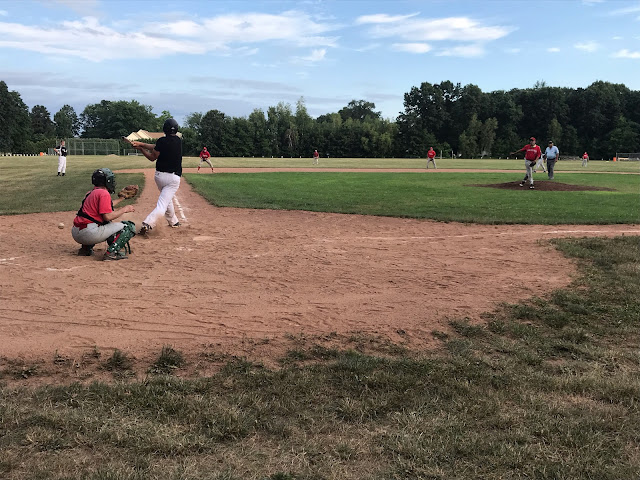